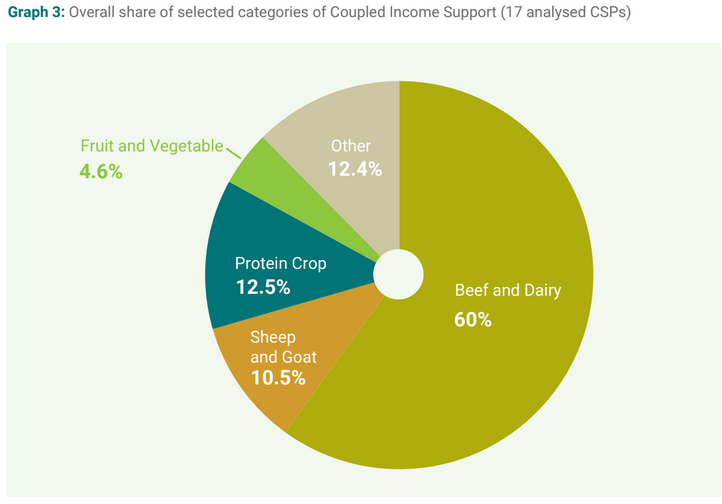 The CAP budget makes up a third of the EU’s overall expenditure, which amounts to roughly €380 billion spent for 86% of the EU’s farmland. In times of multiple ecological as well as food security crises, it is of vital importance that this much taxpayer money is spent in a sustainable and effective manner. However, the report shows that the Member States do not spend enough on sustainable practices and sometimes spend it at the least on questionable, at the worst on downright harmful measures.

The CAP budget consists of two main pillars: Pillar 1 (European Agricultural Guarantee Fund EAGF), the much larger budget portion (around €270 billion), is mainly based on untargeted subsidies in relation to land and operation size. Pillar 2 (European Agricultural Fund for Rural Development EAFRD) is the smaller but also the one more suited for targeted spending on restructuring, rural development, and performance- and delivery-based models. Countries have the ability to transfer 25% of their budgets from one pillar to the other without further justification. Another 15% can be moved from pillar 1 to pillar 2, if these funds contribute to environmental objectives. Out of the 17 analysed NSPs, 6 countries did not take advantage of this option at all, while only two transferred more than 10% (Germany and the Netherlands) and two countries (Poland and Hungary) actually transferred money from the underfunded second pillar to the first one, effectively cutting the pillar 2 budget by a third.

On average, almost half of the funds of the CSPs are hectar-based income support payments, which are said to be completely ineffective for sustainability efforts. 4 countries even use more than half of their CSP funds in this area. Generally, there is no increase in spending for environment and climate objectives, but rather a stagnation of 30% of the CSPs on average. The Netherlands, Czech Republic, Slovakia and Ireland have the highest budgets reserved for environmental, climate and animal welfare related measures.

Alarmingly, a whopping 70% of the NSPs’ coupled income support is dedicated to livestock systems. The report says on this: “Coupled income support (CIS) for intensive livestock sector is particularly problematic. According to “A toolbox for reforming environmentally harmful subsidies in Europe”, a subsidy that lowers meat production costs is considered harmful to the environment as it may increase meat production and therefore also greenhouse gas (GHG) emissions, put pressure on land use and cause other environmental stressors. Despite that, all analysed CSPs (except the Netherlands and Ireland) offer coupled income support for livestock, which is in contradiction to EU and member states’ commitments to phase out environmentally harmful subsidies. Overall, in the analysed CSPs, the share of support for livestock represents 70%, or €12 billion over the whole period. The support for protein crops is also basically a subsidy for livestock and often pays for intensive soy production.” 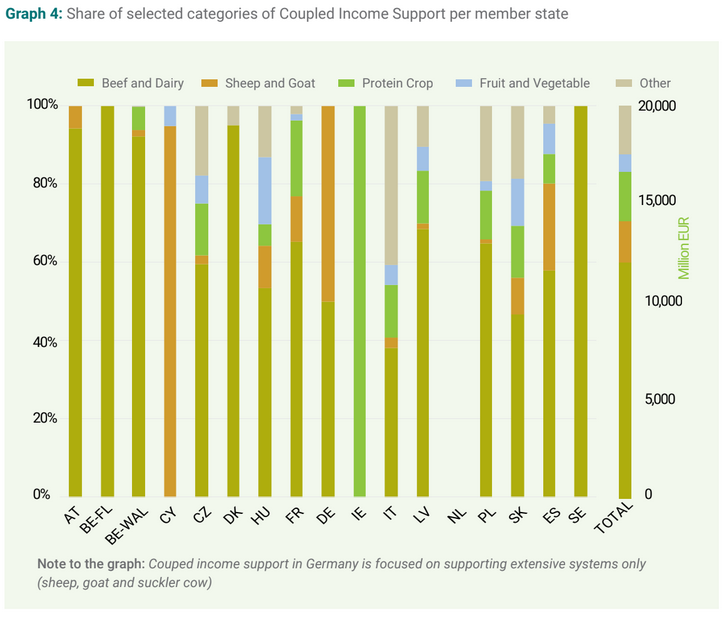 The environmental organisations behind the report believe the budgets to be highly unlikely to support a transition to sustainability.

No ambitious climate and environment targets in sight

Rewetting just 3% of the peatlands would be the cheapest and most effective mitigation measure, as it could offset the emissions from the drainage and exploitation of the peatlands. However, use of rewilded or rewetted peatlands is not eligible for direct income support payments, unless those lands are used for cotton production.

The report says that there is no way the EU can fulfil the Global Methane Pledge without addressing agricultural methane, which means livestock. When it comes to the CSPs’ eco-schemes, less than half of them are aimed at extensive livestock farming. Only 8 out of 50 measures were actually considered by experts to have a positive effect, while 10 either support the status quo or count on techno fixes instead of transformations. Animal welfare schemes, which are counted under the eco-schemes, are largely aimed at improving the living conditions of animals in intensive systems, for example giving them more space or outdoor access. An Irish voluntary animal welfare scheme is aimed at genomic techniques that will reduce the number of male dairy calves, which are largely useless for the industry, and instead will “generate” more beef male calves. The second most prominent “eco-scheme” is the rearing of rare or indigenous breeds. The third most common livestock scheme is directed at grazing, whereas in three countries (Austria, Italy, Ireland) this could actually lead to overgrazing. There is also one outstanding negative example of a CSP: 14% of the Belgian-Wallonian CAP budget will encourage livestock intensification with 4-5 livestock units per hectare, whereas the current EU average is 1 and in France there is a ceiling at 1.4.

The livestock verdict of the report reads: “While most livestock-related green schemes appear positive, in nearly all cases national experts commented that they would only support systems that were already extensive, or would only slightly improve practices in intensive models. However, this falls badly short of the large-scale transition that is needed and will not support any significant reduction in animal numbers in the areas with most intensive livestock rearing where it is needed the most.”

With regards to biodiversity the analysis claims that no CSP goes beyond the already insufficient minimum criteria given by the EU Regulation and regarding natural resources “the overall picture is one of low ambition which will likely lead to the continuation of the status quo in most of Europe.” 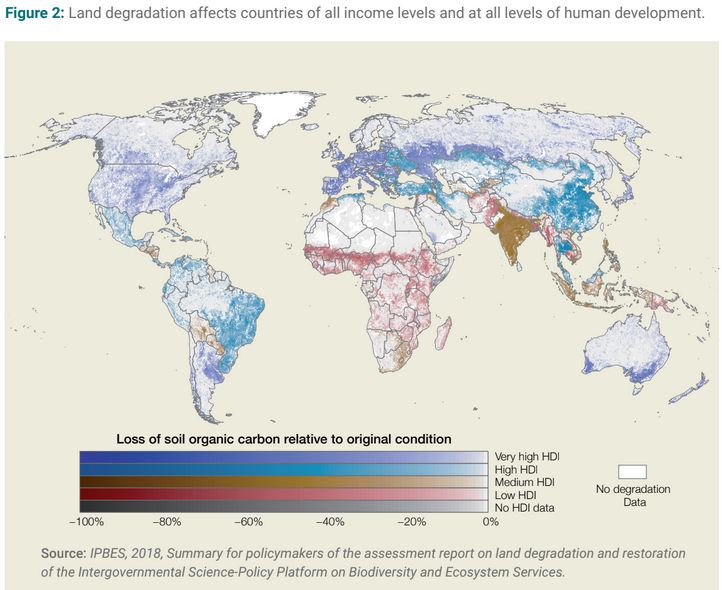 In conclusion, agricultural policies are low in ambition with regards to sustainability measures, oftentimes only safeguarding the status quo and are sometimes even harmful.

What needs to change

BirdLife, EEB, and NABU also give recommendations on the way forward, which EVU can only echo. They say a larger budget share and attractive premia are needed for effective interventions. These interventions should also include “the transition of the livestock sector and lead to a significant reduction in animal numbers, firstly in the areas with most intensive livestock rearing”. It is also important to involve scientists and NGOs as citizens’ representatives in the planning and oversight of the policies and schemes. Decoupled income support payments should be phased out and last but not least- we need a new overarching governance system holistically addressing the food and farming system which also acts as a framework for the Common Agriculture Policy.