The Food and Agriculture Organization of the United Nations (FAO) recently published its Statistical Yearbook 2021, which takes a look at the development of the food and agriculture sector worldwide. As EVU we are diving into numbers of animal food vs plant food production and their various implications. 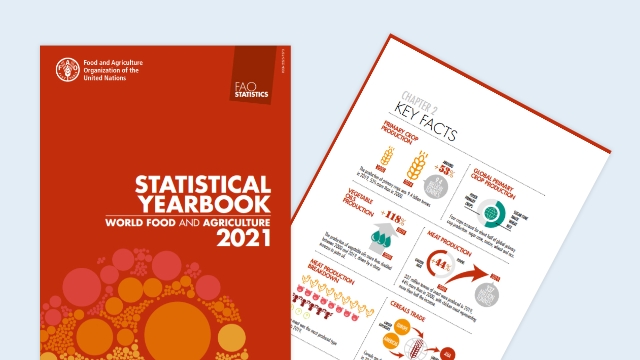 The FAO Statistical Yearbook 2021 shows the development of the economic dimensions of agriculture; production, trade and prices of commodities; food security and nutrition; and sustainability and environmental aspects of agriculture with collected data since the early 2000s. Some of the data is only available until 2019 at this point, so there will be knowledge gaps with regards to the effects of the Corona crisis, which must be assessed in the coming years and which will certainly be interesting, especially regarding their long-term effects.

Globally, the value added of agriculture, including fishery and forestry, increased by 73% between 2000 and 2018, landing at USD 3.5 trillion. Whereas the share of agriculture in total gross domestic product (GDP) remains below 5% for the Americas, Europe and Oceania, in the same time period, it dropped from around 10% to 7% in Asia and increased from around 14% to 16% in Africa.

In 2019 4.8 billion hectares of land were used for agriculture worldwide, which is 3% less than in 2000. The majority of that land, roughly two thirds, still accounts for permanent meadows and pastures and the other 33% are used for cropland. 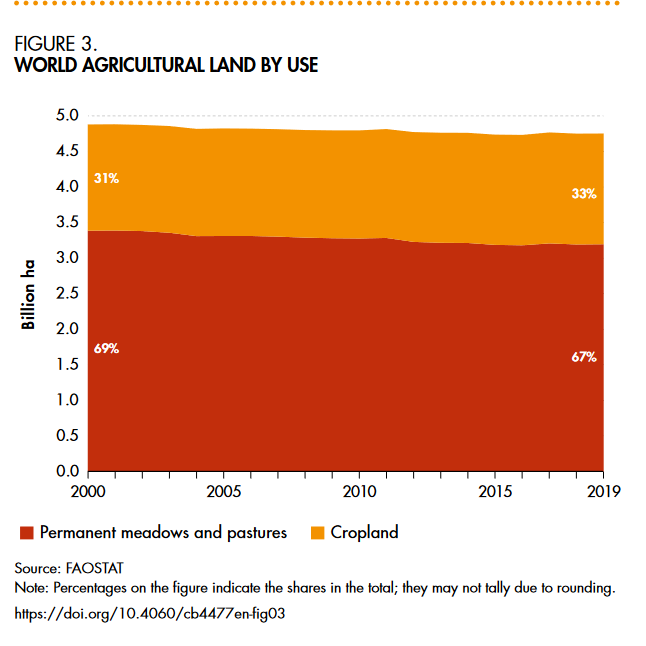 In general, livestock production has continuously increased over the course of the last 20 years.

This massive increase in chicken meat production is especially problematic from the ethical perspective, as it involves far more individual animals than other forms of meat production. Studying the reasons for this, which could range from the preference for ‘white meat’ for health reasons, to easier farming conditions, will be important to assess strategies of reversing this trend.

Germany is the world’s third largest pig meat producer, with a share of around 5% of global production, or around 5 million tonnes. 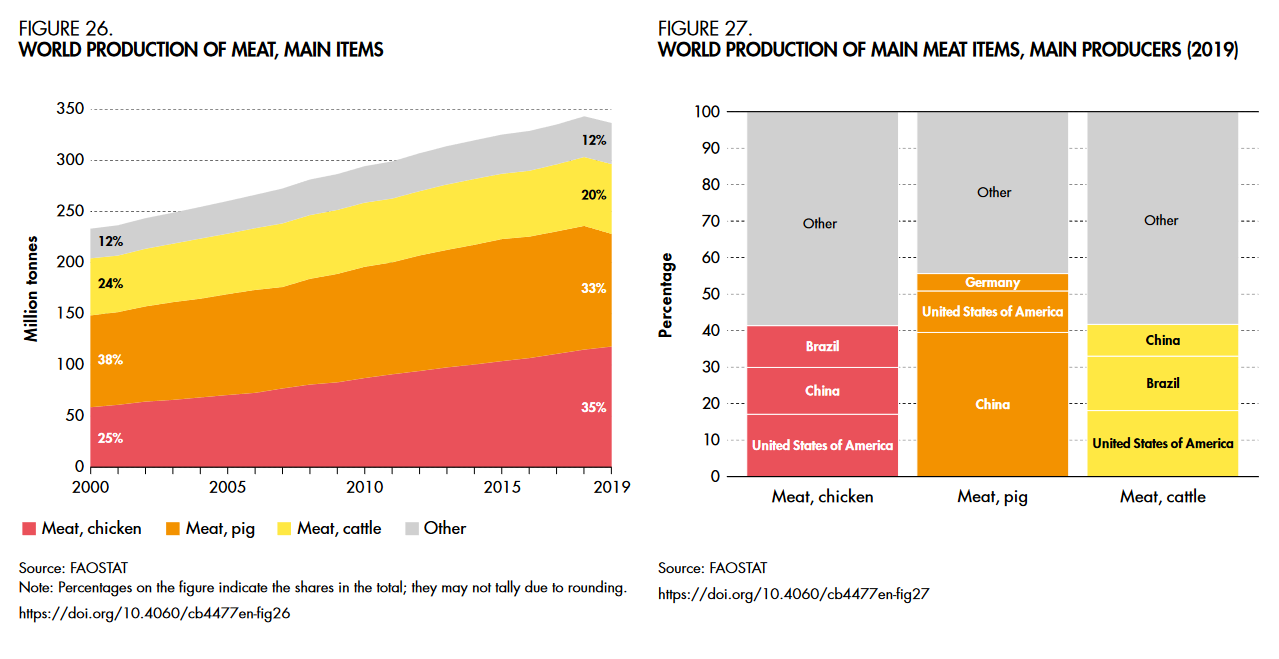 Worldwide milk production is one the rise as well. It went up by 52% to 883 million tonnes in 2019. The development in Asia for milk production is noteworthy again, since Asia’s share of global production rose from 29% to 42%, which is the largest share now. This is especially interesting considering the higher rates of lactose-intolerance among the population. India is spearheading the milk production increase in Asia with a 21% share of the global market.

Furthermore, egg production increased by 63%, with Asia being the region producing most. Fisheries and aquaculture production rose by 41%, with aquaculture being the main driver and increasing its share in overall fish production from 26% to 48%, which has major implications for animal welfare again, as many individuals are kept in extremely crowded conditions. 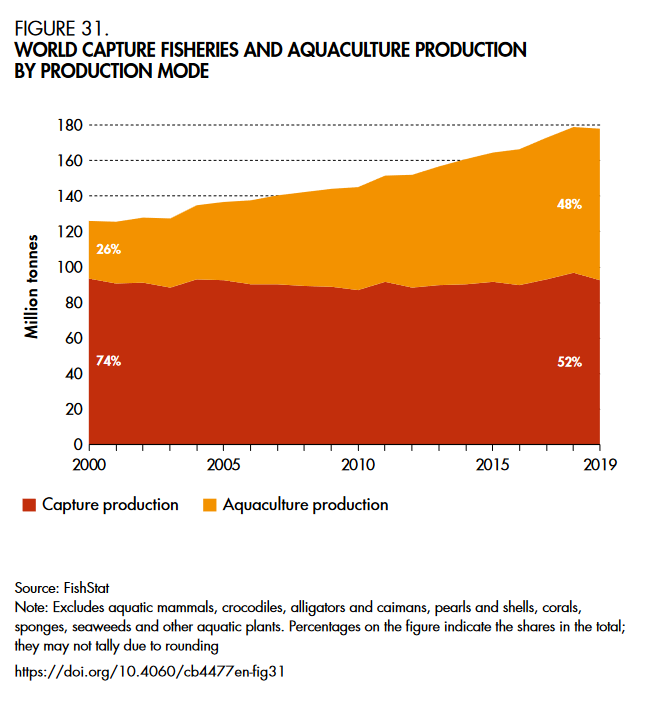 As regards plant food, primary crop production has also seen an increase of 53%. “With slightly less than one-third of the total, cereals were the main group of crops produced in 2019, followed by sugar crops (24 percent) and vegetables and oil crops (12 percent each).

Fruit, and roots and tubers each accounted for 9 percent of the total production.”

Europe is a net food exporter since 2013, with the Netherlands being one of the three largest net exporters worldwide. The largest net exporter is Brazil, with soya making up a big chunk of those exports. The FAO’s Food Price Index showed a price surge in the early stage of the Corona crisis, followed by a price increase in 2021, which is at its highest in 2021 since 2011.

In 2019 agriculture accounted for 10.7 billion tonnes of greenhouse gas emissions, which is 2% less than in 2000. Yet, on-farm activities (“those related to crops and livestock”) make up 67% of those emissions, and grew by 11% compared to 2000. 55% of those emissions are livestock related, 40% of which stem from enteric fermentation directly. Another 27% of the total agricultural GHG emissions is driven by deforestation or forest conversion, which is oftentimes also connected to livestock production. The most emissions intensive commodities are cattle and sheep meat, whereas cereals, except rice, have the lowest emission intensity, though there are changes between the intensities according to region. 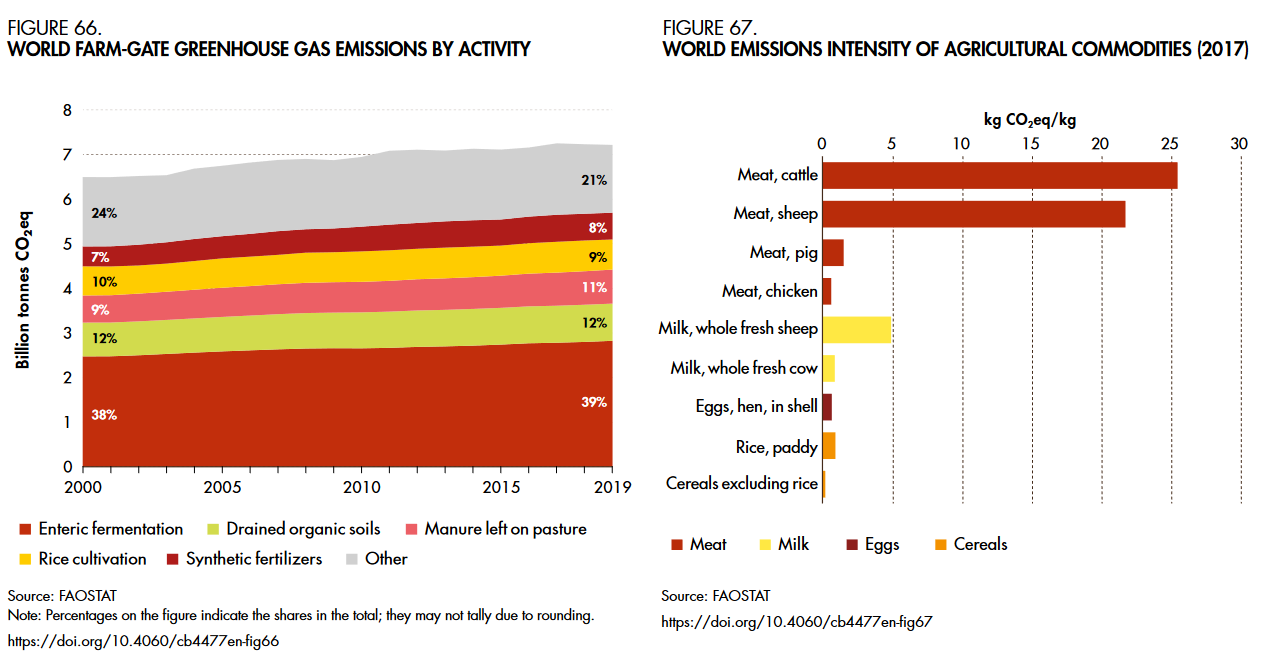 The latest numbers and figures from FAO show that there is still a long way to go to move towards more sustainable food systems. Livestock production, although it significantly contributes to GHG emissions and therefore climate change, is still on the rise, whereas drastic reductions in consumption and production of animal based foods would be necessary. The number of animals suffering in modern farming systems is increasing and in some parts of the world the maximum amount of meat consumption from a health perspective is far exceeded.

We need a shift towards more plant-based diets, especially in regions where animal foods are overconsumed. Sustainable plant food production needs to be promoted on various levels, ranging from marketing measures, to tax policies, to subsidies and research and development. EVU advocates for these measures on the European level.